With a theme of “beauty of martial-arts” lying underneath, Bugaku is a dynamic and stylish performing arts that combines traditional musical instruments with various performances and dances of martial arts. Those musical instruments include biwa (Japanese lute), hand drums, nokan (flute), Shinto flute and Japanese drums.

Budo and Bujutsu is somewhat a symbolism of Japan that cannot go without being discussed when speaking of Japan. Starting with Sumo, the national sport of Japan, and Judo, an Olympic sport, there is kenjutsu, jujutsu, karate, aikido, kobujutsu and the martial-arts boom nowadays.
The skills, form, timing, courtesy, spirit, the beauty within the physical maneuvers, and then the beauty found in swords, armors, and battle outfits, the functional beauty, the aesthetics of samurai, etc…

Bugaku is a Kabugeki of dynamic dance and valiant music that is orchestrated as a composite art of a new art movement called the “martial-arts campaign” proposed from a viewpoint of “beauty of martial-arts” by Koushiro Minamoto.

Currently, there are common dance plays in Japanese martial-arts and traditional performing arts such as the Nanba movement which is attracting some attention from various fields.
Bugaku is an art that restructures the intrinsic value of refined theory of technique for protecting something important at the risk of one’s life.

Also, Bugaku is not only tied to ancient traditions or traditional instruments but also incorporates the acrobatic martial-arts such as XMA (extreme martial-arts), as well as the Idaki, the world’s oldest wind instrument legacy from Australia, which is used to communicate with the spirits.

BUGAKU is a challenge to open a new frontier to Japanese traditional dance play.

Martial art and Japanese traditional dance play have a lot of similarities. Both traditional Japanese dance play and martial art have perfected movements. Each action has its own reason for existence and movement is refined to its simplest form to maintain a perfect balance to give best effect.
Stillness and motion, motion to stillness. When the tension of antagonistic forces reaches to its highest level, the power explodes from static to dynamic. The action throb our heart and it conjures unheard music dwells in our body, it is an art of movement more than anything.

I consider NOH’s interpretation of the world and motion technique accompanied by WAGAKU sounds, that leads already perfected beautility of BUJUTSU to a new level.

The world interpretation of NOH is to “encounter with subtle and profound beauty”.

Yashima (eight Islands) is one example of such an encounter.
This is known as one of the best play written by Yoami (Japanese play writer and composer) with finest music of his work. The play is about woes of dead samurai warriors. Those samurai warriors have fall into hell of eternal fights, from what they have done during their life.

A traveling priest (Waki : a supporting cast) from capital met a mysterious old fisherman(Mae Shite: pre-form of the main character), who hinted himself to be an embodiment of a dead war lord Yoshitsune and disappeared. The old fishermen came into the priest’s dream on that night. In that dream, the old fisherman appeared as Yoshitsune himself (Nochi-Shite: transformed form of the main character), wearing a suit of armor and looked dignified. Yoshitsune showed the scene of Yumi-nagashi, which was about him fighting to protect his name and bravery. Then Yoshitsune showed his eternal fight still going on against Taira-no- Noritsune ( the protector of Noto area in Japan) and then the ghost of Yoshitsune blended into a morning storm from a dream.

This world of subtle and profound beauty is created by NOH movements called HAKOBI. HAKOBI is coming from Japanese word HAKOBU which means “to carry”. NOH movement HAKOBI stands for distinctive NOH walk, it is so called because we “carry” the mask. The world of NOH is heavily dependent on way they move the masks. The mask conjures the sense of subtle and profound beauty such as divinity and mysteriousness. However, if the masked actor moved it in an offhand manner, all sacredness disappears right away. The angling of a mask is very important. That is why NOH require dignified movements HAKOBI.

HAKOBI also exists in BUJITSU (Japanese martial art).
Contrary to KSBUKI, NOH never emits energy outwards, it always draws energy towards the actor himself. For example you can see that from hands movement. In KABUKI, you can see actors occasionally open their hands towards the audience during an act. On the other hand in NOH, actors always show the back of their hands to the audience. The rule limits the movement but it gives an order to the dance. Move, hold, hold and move. The particular limitation of movements draws the audience into a sacred moment.

It also happens in martial arts. When two people are fighting, there is a moment the concentration and tension reaches to the maximum level and the skill of two people balances out. Whatever they do, they know each move will be countered by the other. Only very little they can do and there will be a moment of silence. Each small holy moment of silences, they look for chance to move, the silence is the precast to the next movement towards the end.

WAGAKU perfectly conjures that holy moment into the air with the sound.
WAGAKU is an indispensable partner to Bugaku, because unlike western style music, WAGAKU considers “silence” between each sound is also a part of melody.

BUGAKU is obviously not only dependent on tranquil sounds. In order to express a beauty of the energy flare emitted by the motion change from static to dynamic, BUGAKU has to have both characteristics in accompanied music. While taking into consideration of other music, including Kagura (Shinto music and dance numbers), Gagaku (Ancient Japanese court dance and music), NOH, KABUKI, BUGAKU also taking in valiant sound essence from Satsuma biwa (Satuma lute ), graceful sound essence from Chikuzen biwa (chikuzen lute). Finally quite different from NOH and KABUKI, BUGAKU adopted vigorous beat of Wadaiko (Japanese traditional drum) as well.

BUGAKU is a heightened stylistic beauty within the moment of silence before the action. It embraces NOH interpretation of the world, movement accords with WAGAKU essence to express beauty and holiness dwells with in BUJUTSU.

A legendary Japanese film director Akira Kurosawa was the master of this “moment of silence” before the action. He expressed this stylistic beauty in moment of silence with a film called “Tsubaki san ju-ro.”

In this film, when two samurai sword masters Ttsubaki san ju-ro (played by Toshiro Mifune) and Muroto Han-bei (played by Tatsuya Nakadai) faced against each other, there was a moment of long silence. They were absolutely equal in their power and they knew one movement leads to the decisive blow. There was a beauty of “balance and tension”. Once a perfect balance reached to climax, the silence ended with a flash of a sword and splash of bloods. When this was shown in America, there was a standing ovation in the theater. The silence was the most talkative motion in the film, without that scene the film never accomplished the admiration.

BUGAKU is a new style of Japanese dance art, which is a refined fusion of the subtle and profound beauty of NOH and the active of silence in BUJUTSU.

Finally, I would like to explain about BUGAKUZA which was established to widely spread the understanding of BUGAKU.

Since it was established, BUGAKUZA invited to Yasukuni Shrine, Ikuta Shrine and many other shrines and temples to perform dedicatory dance. Also BUGAKUZA was invited to perform in Museums, NOH stages, Fuji Rock Festival and many performances in foreign countries such as London, Paris, Firenze, Brussels and Jerusalem.

I especially remember the performance in Firenze. BUGAKUZA held performance at
Basilica di Santa Croce (Lecce), where Giotto di Bondone gave all he had in his skill of creation and it is the final resting place of Michelangelo and Galileo. Performing with timeless masters of history inspired me and gave me chance to grow.

I am still on the way to perfect BUGAKU. It is a growing art. As an originator of a new style in traditional art, I feel it is my duty to make BUGAKU known to world. For that reason, as well as to be a best performer, I devote myself to be a best teacher of BUGAKU. Please enjoy a new expression of Japanese dance art BUGAKU with us. 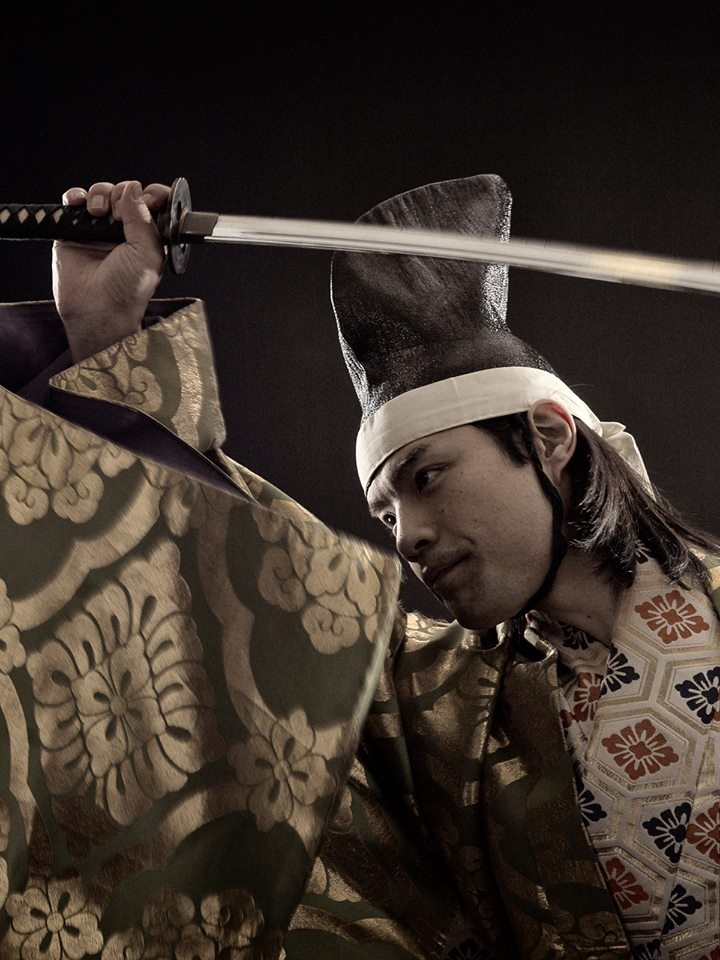 Koshiro Minamoto
The tragic loss of his mother in 2005 left Minamoto with the inspiration for the ideas behind Bugaku, which ultimately led him to the founding of Bugakuza, which was founded on the principle of being a representative composite of the arts of samurai culture, incorporating their unique outlook on the representation of the relationship of life and death as well as the samurai warrior spirit. Bugaku projects the way of life and the aesthetics of the samurai and their approach to both death and life as being imbued with the same level of beauty in design. These philosophies flow from using one’s awareness of mortality to find the true beauty in life, to see the elegance inherent in well-managed precision, to find the inner strength to defend the weak against evil, and to carry within one’s heart the aesthetics of grace in all things. Bugakuza has also traveled the world, spreading their unique interpretation of Japanese culture to places such as World Heritage Site Santa Croce Basilica in Florence, Rome, the Hebrew University of Jerusalem, London, Paris, Brussels, Sao Paolo, and Shanghai, among others, as well as events within Japan such as earthquake relief events and Fuji Rock Festival 2009. His past performances include「Onikiri」(2006),「Ouka」(2008),「Nisshoku」(2009),「Onigami」(2010),「Yashima」(2011),「Murakumo」(2011),「Kogarasumaru」(2012), and [Onigumo」(2015), among others. He is also a co-representative of the Citizen’s Group “Team Samurai,” based in Kamakura, in addition to being published in the monthly publication “Martial Arts” by Nippon Budokan.  Official Homepage: http://www.bugaku.net